The Stigma of Anti-Depressants

By now my story is well documented.  I’ve suffered through some devastating events over the last number of years.  I’ve talked about the struggles of a failed marriage and business, and most tragically the suicide of my 14 year old daughter, Madeline.  All these events significantly contributed to my own personal battle with depression.   I’ve also talked about my own personal victories; the reinventing of myself and launching of my new business, The Finish Line Group, the successful way I battled depression and turning the tragic death of Maddie into a platform to bring greater awareness towards youth mental illness.

Is my life normal?  It’s questionable whether it will ever be truly normal again.  There are some events that will have a life-long effect upon who you are and what you have become.  By no means does today’s events predetermine who you will be tomorrow.  My only true realization, by doing nothing will certainly not change your future path.  What works for you today will not necessarily have a positive effect upon you tomorrow.  This is as true in life as it is in business. 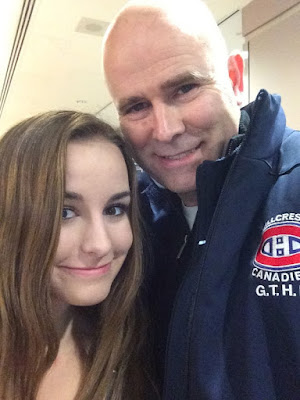 I’ve been taking anti-depressants since a month after Madeline’s passing.  There was an initial reluctance because of the often-feared side effects of anti-depressants and my less than great experience with them in the past.  When the emotion became too great to function normally, Dr G convinced me that it was the right thing to do.  Within a week, the medication allowed me to focus, relieved some of the emotional lows that I was experiencing and allowed me to function on a day-to-day basis.  It’s not that the medication made me emotionally void but instead allowed me to resume life with limited side effects. I had always looked at this as a temporary remedy.

About eighteen months after I had decided to go on these meds, I had decided to ween myself off them. I decided that I didn’t need the help anymore.  I had people close to me offering different opinions.  Some said that I needed to get off them as quickly as possible and others questioned my decision and said it was too soon and to carefully weigh my decision.  A part of me didn’t want to be dependant upon medication to feel better.  I thought I could deal with this on my own.

I talked to some people who had confided in me that they were on anti-depressants or anti-anxiety medication. I said that, “I would never have known.” “Exactly my point”, they would respond.  They had tried to go off their medication but realized the negative side effects of not being on them, far out-weighed any side-effects of being on them.  For them, these meds help to normalize their life, allowed them to greater contribute to society and manage their own lives and those of their family.

Does that make them strong or weak?  I’m not sure but it certainly makes them smarter in recognizing that that their richness and quality of life, productivity and functionality is positively impacted by the aid of these meds.

"Maintaining mental health is as important as the diagnosis"

Mental health is a state that people with a mental illness hope to get to. Whether they’re able to achieve it by exercise, counseling, medication or their approach to living life, it’s better to have mental health regardless of how you achieve it.

One of the objectives of the Maddie Project is to bring greater awareness to youth mental illness and to reduce the stigma by putting up your hand and asking for help.  If medication assists in the achievement of mental health, then maintaining it is as important as the diagnosis.
I’ve decided that my mental health, at least for the time being, is achieved by the aide of me taking medication.  Whether this is a permanent or a temporary assist, it’s one that at least for the time being, contributes to my mental well-being….and I am the only one that can make that determination.

Please share and help to support The Maddie Project by bringing greater awareness and access for youths and their families affected by depression and other mental illnesses.

Email ThisBlogThis!Share to TwitterShare to FacebookShare to Pinterest
Labels: the stigma of anti-depressants